CAN'T YOU JUST PICTURE IT? 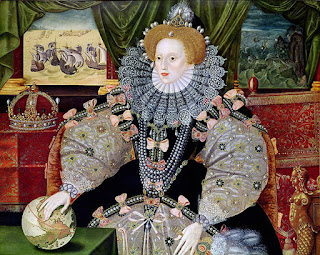 The Armada Portrait of Queen Elizabeth I, c.1588
George Gower. Woburn Abbey, Bedfordshire, UK. http://www.luminarium.org/renlit/elizface3.htm
About once a year I try to sit down and read a writing reference book. One year I picked, The First Fifty Pages by Jeff Gerke since I have the hardest time putting together the first part of a manuscript, but once I get through this section my characters come alive and I sail through the rest of the story. Below I share some of Gerke’s thoughts.
During the Renaissance period a person’s portrait included items that conveyed much about his interests, background and life. For example, look at the picture above of Queen Elizabeth I.  See the globe, and her hand resting upon it? Perhaps she wants to rule other countries besides England. Is she pointing at a particular land that she wants to have? Why does her crown sit beside her and not on her head? Look out the window on the left. Looks like the queen is in favor of a large navy or, perhaps it symbolizes her power. What’s out the right window? I’m thinking maybe it symbolizes the fate her opponents faced in battle. Your guesses are probably as good as mine.
I started to think about myself. What would be a representation of me? A typewriter or computer, a small dog, my books, a teacher’s bell, something like a rosary to symbolize my faith in a higher power, a picture of my family on the table and a pecan mud slide from Diary Queen. My setting would probably be in a forest, or at least be out of one of the windows. Think about all the things that make you who you are and put them in your picture (at least mentally).
If your hero had a portrait done such as this, how would he want to appear? How about your heroine? What would be the setting? What will he/she wear? What would be in his hands? On the table? Out the window? If you know your hero in his essence you can figure out how to display it.
Further, if your hero/heroine could be anywhere else in the world what would she be doing, wearing, or talking about? How about putting her/him into a different time? How would your character get around if there wasn’t a car? What would be the ultimate-for-him activity?
Designing this portrait will help you figure out who your hero is. When he is tossed into trouble how will he handle it? Come back to this picture and look for clues.
Gerke says the most important thing to consider: Why would this be what the character chooses? How is this the ultimate expression, or revelation, of the person’s core?
What would be in your portrait?
More about Jeff Gerke:
He says, “Please point people to www.fictionacademy.com, which will be my site for online video training when we go live later this month.”
You can find Jeff’s book at: http://www.amazon.com/The-First-50-Pages-Editors/dp/1599632837