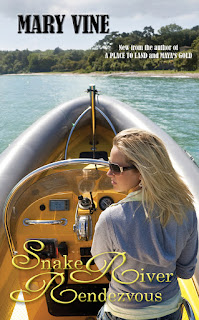 I found a nice review from Carol Peterson re Snake River Rendezvous:

Snake River Rendezvous is a light romance/action novel set along the Snake River between Oregon and Idaho, not far from where I live. In the story, a recent business graduate takes over a run-down motel and meets her first paid guest, who not only turns out to be an ex-beau but also an FBI agent chasing a terrorist believed to be hiding somewhere in the area.

I enjoyed the interplay of the two characters as they re-discovered each other while forgiving each other for past hurts. Subplots about family relationships, feelings of guilt and loss and career decisions were interesting and well-integrated into the story, as was a solid thread of faith that was presented sincerely, yet with a light touch.

I read the book on Kindle. It is also available in paperback and has just been released in audio format, which is great for a lot of people I know who enjoy listening to the story. I recommend this book as a great read.

You can meet the author, Mary Vine, and find out about her other books at her website.


Thanks  Carol!
Posted by author mary vine at 7:52 AM No comments: